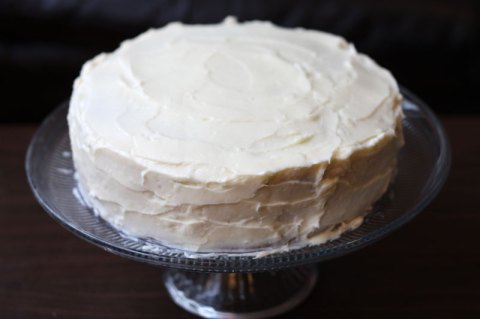 I was out of town over the holidays when the massive snowstorm hit the northeast. At work they declared the first snow day in seven years and I missed it! Because I was in Canada! The irony was deeply irritating. I almost wanted to go back home just so I could take advantage of the snow day, but unsurprisingly, it was snowing in Canada too, so I stayed indoors instead. 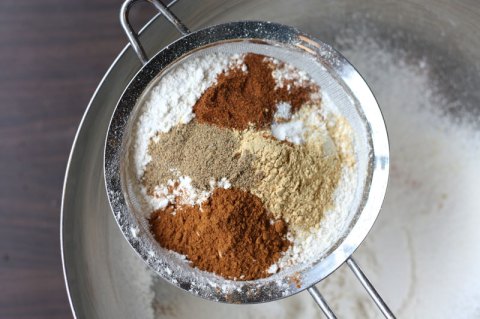 A couple weeks ago, though, we got hit by blizzard #2, and I had the chance to hole up indoors, hiding from the harsh weather and feeling excessively cozy. I also was seized by the urge to make a snow-appropriate cake, but only on the condition that I didn’t have to go outside to buy any missing ingredients, which I was pretty sure would lead to a melodramatic death by snowstorm. Luckily, I always have butter and cream cheese in the fridge (healthy person that I am), so it wasn’t too hard to come up with a feasible recipe. I had to substitute the sour cream and reduce the orange peel, but really, who likes citrus that much anyhow? No one, that’s who. 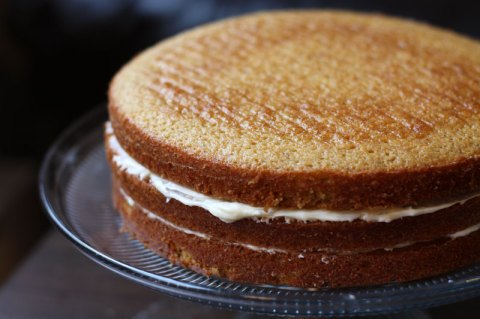 This cake is perfect comfort food, and should ideally be eaten while drinking hot chocolate and feeling very smug about being indoors while it snows outside. Although the layers look fancy, it’s really not much work. Apparently it’s supposed to snow again tomorrow – although I personally don’t believe it because clearly all the snow is already in towering mountains on my driveway – and if so, I might just make it again.

Spiced Layer Cake – adapted from Epicurious
I found that there was just barely enough frosting to coat the cake. I liked the ratio, but if you’re a frosting fanatic you might want to up the frosting recipe by a half.
Cake:

For frosting, beat cream cheese and butter together until smooth. Beat in sugar, then vanilla. Chill until ready to use.

You are currently reading blizzard cake at one cake two cake.